Center for Council offers a variety of tailored services and programs for groups or organizations.
Contact Us To Learn More

Center for Council has played a critical role in a series of interfaith "Bearing Witness Retreat" programs offered through Zen Peacemakers.  At each of these international events, Center for Council offers training, coordination, support and consultation in integrating Council practice.  Daily small-group Councils are offered, led by trained facilitators, and public trainings and seminars in Council are often available.

In 2014, at the invitation of Bernie Glassman and the Zen Peacemakers, Center for Council was invited to Kigali to work with a group of peaceworkers committed to healing their country.  Fourteen participants form local NGOs were to participate in the upcoming Bearing Witness Retreat, offered as part of Rwanda’s commemoration of The 1994 Genocide Against the Tutsis. Rwandans are deeply engaged in a healing process that impacts the entire population, including the generation born in the post-trauma period and very much touched by it; NGOs are profoundly aware of the challenges of reintegrating the perpetrators of genocide, many of whom have served twenty-year sentences and are approaching the end of their punishment, ready to return to the communities in which the crimes were committed. The modality of Council offered an invitation to go beyond attachment to "knowing who is who," beyond what one might think about another member of the circle who might hail from a different background, and how it might be to set aside all we believe we know in order to be truly present with the emerging moment.  The potential for acknowledging all that we are and all that we might become together offered a unique opportunity to NGO staffers looking for ways to support the country's new "One Rwanda" initiative. 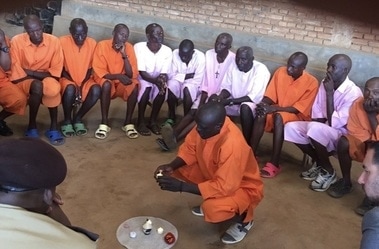 The retreat was a weaving of Rwandans, Europeans and Americans and proved to be a profound and impactful experience for all involved.  Council played an important role in each day, providing a container for listening deeply to incomprehensible grief and suffering and speaking authentically about its  impact on participants.  The Rwandan team was so moved by what they observed to be the power of the Council process that they worked to create their own new organization, the Rwanda Center for Council, which was later recognized by the Rwandan Governance Board as an official NGO.  Using a Council-based program model, inspired by that being developed in California prisons, and in collaboration with the Rwanda Correctional Service, this organization plans to introduce and support Council practice inside the Rwandan prisons — in addition to providing support and coaching to a growing network of community-based organizations throughout Rwandan civil society.

Center for Council went on to co-host a follow-up conference on the work begun at the retreat at the invitation of the Rockefeller Foundation, which took place at Rockefeller's  Bellagio Center, on Lake Como.  That conference  brought together US and Rwandan representatives from government, academia, mental health and NGOs working in the area of corrections and offender rehabilitation, in collaboration with experts in trauma resiliency and the practice of Council, for extensive dialogue and planning.

Soon thereafter, California’s Inspector General, Robert Barton, joined Center for Council's Jared Seide on a visit to Rwanda to assess the viability of partnering on Council programs in Rwandan prisons and villages and met with the leadership of the Rwanda Correctional Service (RCS). IG Barton recommended an official partnership to support these programs and to collaborate around effective innovation. ​

​Read more about the work in Rwanda.

​The Zen Peacemakers have hosted Bearing Witness Retreats at the site of the concentration camps of Auschwitz-Birkenau in Oświęcim, Poland, for over twenty years. These events have continued annually and are multi-faith and multinational in character, with a strong focus on the Zen Peacemakers’ Three Tenets: Not-Knowing, Bearing Witness, and Taking Compassionate Action.  Participants include the children and grandchildren of survivors of the camps, as well as decedents of the Nazi guards and officers.  These retreats include Council as a foundational practice throughout the program.

Turning toward suffering can take many forms. As a practice, it can seem counterintuitive as a strategy for addressing trauma and, to be wholesome, it demands skillful means, deep fortitude and compassion. The suffering of the Bosnian people is deep and profound and the horrific events of the 1990s are still tender and uncomfortable. Even now, excruciating memories are triggered by certain sites, uncorked stories, even turns of phrase. Despite the notorious “Bosnian humor,” an off-color and surprising proclivity for diffusing tension with dark jokes, there seems to be a longing for a real encounter with our common experience of suffering. So much there has gone unaddressed, unrestored, unmet… and a deep and embodied experience of coming together to grieve, release, celebrate feels emergent. 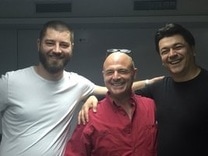 Zen Peacemakers sponsored a 4-day Council Training with an assortment of peaceworkers engaged in the complex and challenging work of rebuilding, coordinated by Vahidin Omanovic and Mevludin Rahmanovic, two dynamic local Imams who have created the Center for Peacebuilding (CIM), based in Saski Most, BiH. Their inspiring work is devoted to fostering reconciliation between Bosniaks, Serbs and Croats. The Council Training offered was deep and intense and set the stage for a Bearing Witness Retreat to follow in which these Peacemakers would work with other Europeans trained in Council to facilitate daily Council circles for several dozen participants.  See Zen Peacemakers' website for more details.

Read participant testimonies and an article by Director Jared Seide.